Most of us will remember clearly feeling shocked when petrol passed £1/litre over a decade ago. Since then, UK drivers have only seen the cost of fuel drop below that once since the 2008-2009 financial crisis.

Despite the advent of electric vehicles and the European push for all electric-road use by 2035, the truth is that the majority of cars in the UK are still ICE (internal combustion engine) powered.

The gradual rise in costs has reached its apotheosis in 2022, with costs having spiralled completely out of control. Reports from the RAC suggest that the average petrol price is now 186.5p/litre, with it now costing more than £100 to fill up the average family car for the first time ever.

Given that fuel is one of the largest non-housing costs that make up an average family expenditure, this has significant knock on effects for personal wellbeing, especially given economic difficulties elsewhere. The stock market is having its worst start to the year since 1939.

So why is petrol so expensive in the UK in 2022? There are a few reasons for this, and we will discuss them in this blog post.

The high cost of oil

One simple answer is the high cost of oil, which is the most significant factor in the price of petrol. The price of a barrel of Brent crude oil, the international benchmark, has more than doubled since 2020. It now costs over $100 a barrel. This is due to a variety of factors, including:

All of these factors have contributed to the high cost of oil, which is passed on to consumers in the form of higher petrol prices. Furthermore, oil is priced in USD, and the pound is very against the dollar at the moment, meaning our pounds stretch less far than they did before in USD terms. 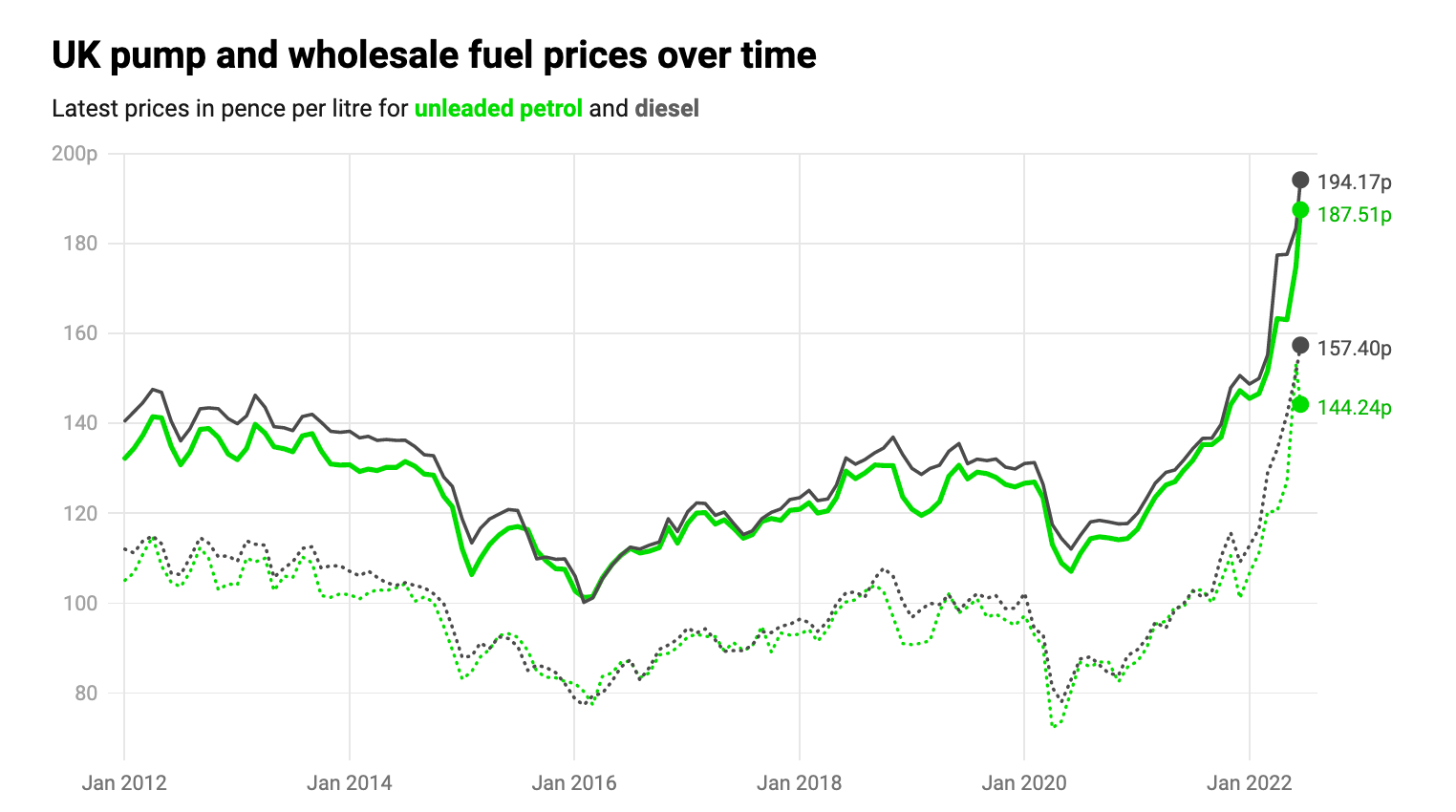 The other significant factor in why petrol is so expensive in the UK in 2022 is taxes and levies. The UK government imposes a tax on every litre of fuel sold, known as Fuel Duty. This currently stands at 57.95 pence per litre. In addition to this, there is also a levy known as the Climate Change Levy (CCL), which is charged on all fossil fuels used by businesses. The CCL currently stands at 26.43 pence per litre of petrol. A period of austerity to alleviate a potential recession may see further increases in taxes, especially given the proportion of cars that are electric and hence exempt (although for how much longer we can only guess).

These taxes and levies make up a significant proportion of the price of petrol, and are one of the main reasons why it is so expensive in the UK. It has always been significantly more expensive than the US, but now more noticeable than ever.

Another factor that contributes to the high price of petrol is limited refinery capacity. The UK has a total refining capacity of around 45 million tonnes per year, but most of this is dedicated to producing diesel and other fuels, with only around 15% being used for petrol. This means that there is very little spare capacity to meet unexpected increases in demand, which can lead to shortages and price hikes.

The rise of electric vehicles

The fourth factor that we will discuss is the rise of electric vehicles. While electric vehicles make up a small proportion of total car sales at the moment, they are increasing in popularity every year. This is due to a number of factors, including falling prices, government incentives and concerns about climate change. This reduces the top line for both petrol itself and ICE vehicles, having knock on effects for projections and costs moving forward.

Geopolitical tensions in the Middle East

As we have seen, there are a number of factors that have contributed to the high price of petrol in the UK. However, one factor that is often overlooked is geopolitical tensions in the Middle East. This is one of the world's most important oil-producing regions, and any unrest here can lead to supply disruptions and higher prices.

The current situation in the Middle East is particularly unstable, with tensions between Iran and Saudi Arabia, as well as the ongoing conflict in Yemen. This means that there is a risk of further supply disruptions in the region, which could lead to even higher prices.

So there you have it: a brief explanation of why petrol is so expensive in the UK in 2022. Unfortunately the reasoning isn't much consolation: your next trip to the petrol station will likely be a costly one and there's no escaping that. However, from a financial point of view this makes it even more important to factor in increased costs to your budget forecasts for the remainder of the year, especially given the tough economic circumstances elsewhere.